K. presented the following style of Maria Lluch-Senar's communications to the Conflict Resolution Committee at CRG, she called for it and as she was asked for evidence she highlighted for them the most odd quotes. From her point of view.

They have not found them really abnormal. They rather silently agreed to be sneakily used by this Maria Lluch-Senar' for her dismissal. She have had a correspondence with Juan Valcarcel, genuinely presuming his independence, but no one from the Committee expressed any sorry to her after all.
Juan Valcarcel just told K. quietly and smiling that the dismissal would be illegal and K. could go to the court then. Nice kids, really.
You lose your job, never mind, this is just our game with us playing people.
Moreover, it turned out this Committee was a fake, a set-up: K. called for it and... Boom! In their dismissal note, later to the Court they lied that the Committee was asked to make K. follow the discipline. Isn't it graceful? 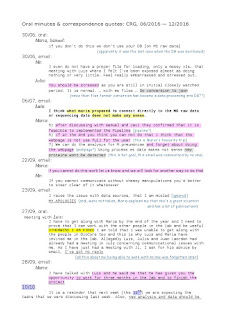 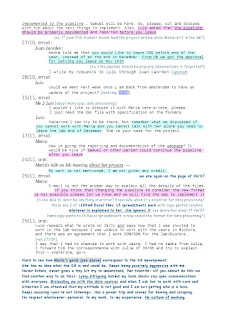 [click to enlarge]
Getting their (Maria Lluch-Senar's & Luis Serrano's) «no one can work with you», «you cannot work with users», «no one can understand what you are doing» and other bullshit like that, just as a way to oppress her, — every time K. heard that she just felt utterly stunned.
(NB: at the same time Maria was blocking any communications with other people in the lab and misleading K. with data sources)
It was told her repeatedly as a method of Maria's stunning intellectual argumentation in response to any technical reasoning too, further absolutely supported by Luis, except only a single one first time (see above) when apparently he dared to openly express his own opinion on the subject (genial Maria' ideas), yet appears that later he was strictly prohibited to be that assertive.
Hopefully he wasn't beaten for that and didn't suffer too much :-|
K. could not get it: how come that people who consider themselves as scientists happened to turn over rabid liars?
What about science they do? If they are lying that at ease…
K:


It should be done this way. Data are normally processed the way I suggest, at least to assure system consistency and data integrity.


You have to obey me.
Doesn't matter that it won't work.
Do what I said to do.
This is you who can work with no one.
If you cannot do my way we find someone else who will do what I say
whatever shit I order to do.

— in italics it was said literally.
Again and again. The very same people have been repeatedly requiring to recognize their scientific authority. Franco style? Or what was that?

There is this a bit nationalistic anecdote which fits very well to the story with this their Maria Lluch-Senar:


— When someone (Frenchman, German, Englishman, Chinese etc) is caught red handed with a freshly robbed thing they:

— When a Spaniard is caught red handed s/he yells: «you just want to spoil my shiny reputation!»

Sad, but true. Yet another stereotype was confirmed one more (and more, and more…) time.
Whoever lie that much — they are very easy to carry on with all possible manipulations, slandering, reversal off your own claims against you and any vile tactics to take over you by any means.
If they can't fight you, they lie about you.

Support bacteria! — they're the only culture some people have!…
…in their labs