Luis Serrano, CRG, forces to talk alone with Maria Lluch Senar and…
a certain «indicator, a precursor and a result of» corruption

(yes, that was spooky!)
…whereas what Maria Lluch proposes «does not make any sense» © Luis Serrano, CRG director
(and that was very true)

This is all about scientific institution. This is where your tax money goes to…

First, ask yourself: what would you do if a blatant liar aggressively required from you recognition of her scientific authority (whereas it's way far to be even necessary)?
And what if she were supported by her patron? 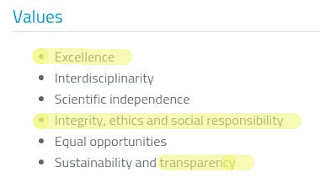 Dictation to process concocted data, coercion to talk only alone (that was felt very awkward) with someone allegedly responsible, but utterly incompetent, work without necessary collaboration, repeated threats, bullying, slandering, repeated lies, and dismissal at the end — was this all included in that «integrity», «ethics» and «social responsibility»?﻿


«Now I did a job. I ain't got nothing but trouble since I did it... not to mention more than a few unkind words as regard to my character. So let me make this abundantly clear» © Firefly

Luis Serrano Pubul: «I think what maria proposed does not make any sense»
A few months later the very same person fired the main addressee of this letter for refusal to recognize the same maria's scientific authority — interesting, isn't it?

All right. Very true. But wait, what?

Luis Serrano Pubul: «You need to leave the lab if you do not talk with her alone»

Of course they perfectly knew that Katerina could talk alone with Maria.
But when you're threatened and coerced to talk alone with someone no matter what is going on and no matter whether your job requires work collaboration — this feels flat out wrong, at very least it makes you just sick. Moreover, if you're already absolutely certain: you cannot give them what they are eager to get from you — and that is not your job and professional skills.

K. was doomed anyway, Luis was playing here as by the time of this his email, several weeks before it, M Lluch-Senar already wrote K. that K. would be fired anyway:

On 28/09/16 14:23, Maria Lluch Senar wrote:
> I have talked with Luis and he said me that he has given you the opportunity to work for three months in the lab and to finish the project.
[NB: K. had 5 years contract signed by Luis Serrano on behalf of CRG, it turned out to be just a sheet of paper. No respect to a person whatsoever, neither to their own legislation]

Maria wrote that (with cc to CRG Director, i.e. Luis Serrano Pubul) the very next day after K. was told that Maria is her boss: the day before this email, on 27/09/16, Luis told K. in his office that for K. to save her job he gave her 3 months to get along 1) with Maria and 2) with the people in the lab — as at the same time K. was falsely accused that she can work with no one, — so if K. gets along with no one then K. is fired.
In reality both these two so nice «warrants» were put away almost immediately.
«There's no honor among thieves» (even «end of December» was a lie… — turned out the middle of December)
K. had no problems whatsoever with the folks in the lab, that was too obvious, but certainly did not matter: apparently Maria was already promised that after 3 months «the toy» would be discarded. 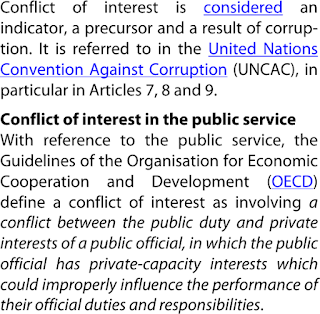 From Library of the European Parliament, «Conflicts of interest in public administration», 05/02/2013:

Chair of Women In Science/Gender Balance Committee at CRG,
Isabelle Vernos is at the same time…
— Director's (Luis Serrano's) wife & member of the ERC Scientific Council!

Hence the party looks even more languishing: there is a certain «indicator, a precursor and a result of» corruption.
CRG Director's wife, his favorite or other closed to him more than others women-in-science — all of them surely have gotten the unquestionable scientific awards and perks: panels, committees, conference trips, etc — you know how creatively and productively modern scientists spend public money, — having such kind of pull is apparently normal for Spain or Spanish science. But for an outside observer the question remains: what exactly those Women In Science™ were awarded for?

But otherwise. What was that?
Franco style (á la féminin) of management in science?
Hard to bring up other allusions…